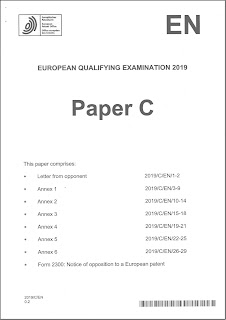 I sat the paper under exam conditions in Munich as a bench marker to give the examination committees some materials for their marking discussion. If you want to try the paper yourself, here are the compendium copies in English, French & German.

This paper was much more manageable than last year - it was possible to do some attacks during the reading, and once you had read the documents, it was clear where a lot of the pieces should approximately go. It was a lot of work to finish -  I had to cut my inventive step attacks and explanation down to the key points only. I heard from a couple of people that it was impossible to finish, but they had the feeling that they had done enough to pass (assuming they were on the right track).

The last day of the EQE is hard going, with a tired brain and tired hands from writing. I got up a little late, so I didn't have time to iron my shirt. I got to the exam on time, annoyed that I would have to sit there the whole day in my wrinkled shirt. And then I opened the exam to read all about irons and steam irons 😄. I wonder if it is based on a Philips Electronics case - there was an address in The Netherlands, and Eindhoven was mentioned where I am based.

See below for more comments and possibly some spoilers

I used up the entire 5 1/2 hours and did not manage to finis. I did attack all the claims, all though the last two were just really notes.

I had some difficulty attacking the second alternative in claim 1, as in the prior art it was cited combined with other materials. I struggled to solve the incompatibility.