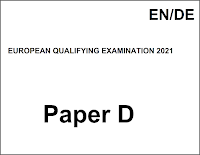 Updated: 3 Mar 21 after message from Exam Board
Yesterday was the e-EQE D Exam (still called Paper D even though no paper is used any more 😉. If you want to try yourself, see here for combined EN & DE copy. The text was extracted from peoples answers (sorry, no French). The EPO normally makes official copies available in the compendium in the week after the EQE.

2. WISEflow, before the exam, after the exam
3. LockDown Browser (many comments posted under PE 2021 post and in Telegram chats)
4. Reporting complaints & problems to helpdesk@eqe.org
CLICK BELOW FOR MORE ABOUT D EXAM (no spoilers)

If it helps, maybe buy me a kopi luwak. Thx!